Classification of Food in Ayurveda

Home→Uncategorized→Classification of Food in Ayurveda 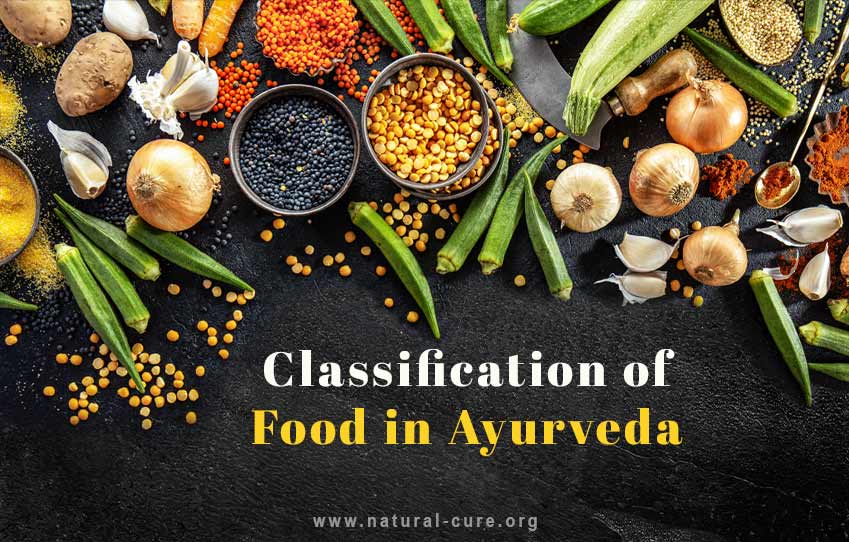 The market today is flooded with digestive and dietary aids for the stomach, along with pills for gas, acidity, and other abdominal diseases. But, in this plethora of information and aids, one tends to get lost and confused about which advice to follow and which to ignore.

Unlike other popular approaches, the concept of diet in Ayurveda and Naturopathy has a broader view beyond the ingestion of food. The method of taking a diet including dietary guidelines is widely known as Ahara Vidhi. It is not restricted merely to the concept of calorie consumption but also recommends methods of taking food, its quality and quantity based upon an individual’s capacity to digest.

According to Ayurveda, every food has its own taste (rasa), a heating or cooling energy (virya), and a post-digestive effect (vipaka). An individual’s digestive fire known as jaṬharāgni largely determines how well or poorly food is digested. But, food combinations also play a major role in it. When two or more foods having different tastes, energy, and post-digestive effects are combined, the digestive fire can become overloaded, inhibiting the enzyme system and resulting in the production of toxins. Yet these same foods, if eaten separately, might well stimulate the fire and be digested more quickly. Poor combining can produce indigestion, fermentation, putrefaction, and gas formation and, if prolonged, can lead to toxemia and disease.

According to Charak Samhita- one of the two foundational texts of Ayurveda, food is classified as follows:

Digestion of food depends upon the innate properties of food. There are mainly two categories of food according to their effect on digestion:

The light-to-digest substances have a predominance of the qualities of Vāyu and Agni Mahābhūta. Therefore, light food articles are stimulants of digestive fire and are said to be less harmful even if they are eaten in excess.

The heavy-to-digest substances have the predominant qualities of Prithvi and Jala Mahābhūta. They do not stimulate digestive fire thus, they can cause harm if taken in excess quantity.

2. According to sources of food

All the food and beverages are categorized under twelve classes according to their source and form. These classes are:

3. According to the Forms of Food

Different types of wholesome foods are categorized into four categories:

These stimulate the digestion and metabolic process.

4. According to the Effects of Food

Food can be divided into two categories according to its naturally beneficial and harmful effects on human beings:

Further, Sage Atreya listed some of the wholesome and unwholesome diets as follows: